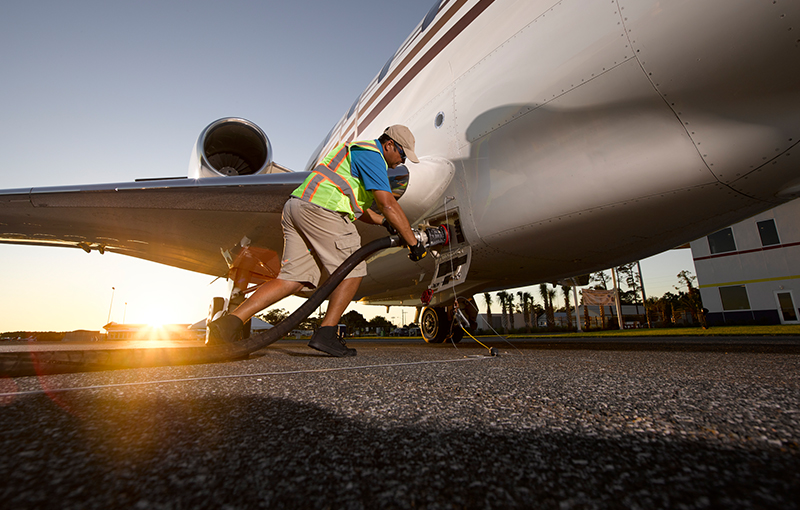 Bent Wing Flight Services will take over as KFHB’s only FBO beginning April 1, and move into a new terminal in June. The FBO will provide its full array of services out of a temporary terminal until that time.

“We look forward to serving the airport’s customer base with excellent, professional care,” said Brian Echard, Bent Wing Flight Services’ owner. “The airport has an exceptional history, which we are proud to share with the aviation community.”

Fernandina Beach Municipal Airport was built during World War II by the U.S. Navy for training the F4U Corsair  airplane—one of the Navy and Marine Corps’ finest fighter planes. The Corsair was known for its inverted gull wings, making it highly-recognizable in the sky and earning it the moniker “the Bent Wing Bird”—the namesake of the FBO.

In further reverence to its military background, the new general aviation terminal was designed to represent the Corsair aircraft, complete with inverted gull wings, a nose section, skylight cockpit and tail. The interior will feature a two-story glass lobby with a model F4U Corsair suspended from the ceiling, and military and historical memorabilia displayed throughout the building.

“The unique design of the new terminal building will quickly distinguish Amelia Island’s airport as an iconic aviation landmark,” said Echard. “As the FBO providing services from the new terminal, it made sense to name our business to reflect the community’s pride in the distinguished history of the airport and pay tribute to the members of our military who served in WWII.”

Joel Hirst, vice president of sales for Avfuel Corporation, said, “The Amelia Island aviation community has been in need of a service-oriented FBO provider for some time. Avfuel is proud to support Bent Wing Flight Services’ mission to fill this void, better serving its customers and attracting more visitors to the community. The FBO team’s passion for sharing the spirit of aviation is matched only by its passion for dedicated service, a value our two companies share.”

As an Avfuel-branded FBO, visitors to Bent Wing Flight Services will benefit from competitive fuel prices through Avfuel Contract Fuel and lucrative rewards through AVTRIP.

Bent Wing Flight Services is Fernandina Beach Municipal Airport’s sole FBO, offering the aviation community full, professional services for a first-class travel experience at KFHB. Honoring the airport’s military roots, the FBO will operate out of a brand-new, F4U Corsair-inspired terminal as a beacon of the spirit of aviation and its contributions to our country.

Avfuel provides fuel and services to the global aviation industry and is the leading independent supplier in the United States.  Established as a supply and logistics company more than 40 years ago, Avfuel is core competent in every aspect that surrounds the delivery of fuel – from refinery to wingtip.  Avfuel combines global access with personalized service throughout a fueling network of more than 3,000 locations worldwide and 650+ Avfuel-branded dealers. Our 100% dedication to aviation demonstrates our passion and commitment to a global community that prospers on the movement of goods and services around the world.